I had an interview with a reporter a few days ago from the Los Angeles Times, about my current work with affordable housing. We had a good talk over tea and a snack of dried apricots and cashews. The journalist stared at the bowl when I offered it to him, and then blurted out, “What made you put out cashews and apricots? We’ve never met before, have we?”

I had no idea what he was talking about until he explained that he has a kind of fetish for cashews and dried apricots—in fact, a bag of it was tucked in his backpack at that moment right across the room—and most people don’t put those two things together!

I laughed, because this kind of coincidence happens to me all the time. I believe it’s a kind of inborn ability we all have, but since it isn’t encouraged in our culture, we rarely even notice when it happens.

I wonder if those of us whose childhoods were difficult, tend to develop our intuitive radars early on to help us through the emotional minefields of our early years? In any case, it is fairly commonplace for me to do this sort of thing unawares: like serving a stranger his favorite, but unusual snack.

My days are filled with stories like this, some having serious consequences—but that’s a conversation for another day. The truth is that not everybody loves me for my unbidden ability that can come over as threatening or too weird for some people. Mostly, though, I get away with it and good things happen.

“How did you do that?” my scientist husband asked me again and again over the years when I pulled off timely coincidences that he considered impossible. I have truthfully never had an answer.

Over the years I’ve learned to trust my intuition implicitly, although I’ve chosen to keep quiet about it so as not to be thought of as a ‘witch.’ I do not enjoy scaring people.

“Reality is more vast, more dimensioned and more loving than we have been taught,” reports Eben Alexander, a neurosurgeon who survived a near-death experience and saw the “many-faceted, many-dimensioned, interconnected, conscious universe.” He goes on to say that we belong to it all, not just to the material layer which, though beautiful and remarkable, would not exist without the infinite and vastly more wondrous Whole from which it comes, and that we all have access to that Whole even when we do not realize it.

For me, it is the largest context of existence, interconnected and interdependent, that I believe in. Just as a tree belongs to its context of earth and roots, soil and fungal web beneath it, and is dependent upon the air and sun and rain for its life, so are we part of an interconnected web of life—a whole universe that is part and parcel of who we are.

Our culture’s materialist mind-set tends to call this way of thinking “woo-woo.” I honestly have no idea why.

But we’ve come to a crisis of belief, and if we stay stuck in our too-tight paradigm of materialism, we are all in danger of self-destructing, I believe. The clues that it is time to let go of habitual ways of thinking appear before us on a daily basis, and we collectively walk blindly past them, too scared to let go and melt into the reality of the larger context of our lives.

However, woo-woo or not, I live by it every day, even when I am considered dangerous to those who fear what they do not understand. But it’s time for me to come out of the closet because we’re in vast trouble now as we go through the eye of this needle. Our consciousness has got to expand if we are to survive!

This is serious, folks!

We are being shown a way through, year after year by patient unseen artists who present their artworks on the grand scale all over the world. We have yet to be collectively willing to pay attention—probably because we have to change our minds about a lot of things in order to accept that this phenomenon—called ‘Crop Circles’—may not be a crazy hoax, but may be Real!

Since they are hidden in plain sight, all over the planet, it may require a relaxed suspension of disbelief on our parts. We may have to just look at it without trying to figure it out because these artworks keep appearing and can be visited right there on the ground. People photograph them, walk in them, argue about them, work out the complex geometries represented in the designs, but the media ignores them as if they did not exist.
Or worse, calls them “just hoaxes!”

How silly when just a bit of awareness and a small shift of perception could help humanity evolve just by being open to the possibility that these massive artworks may be a creative demonstration that the universe, and thus ourselves, are even bigger and more complex than we thought!
This is not so much about designs appearing mysteriously in fields and forests all over the world—it is about Us, I believe. We have a chance to open our imaginations to a larger and deeper reality than we thought was there! How wonderful is that?

Especially if it might help us and our planet through this excruciating time in the world.

I came upon my first Crop Circle in England by a series of synchronicities that required finding myself, unawares, exactly at the right place at the right time. I had staggered off the Cornwall Coast Trail after walking one hundred miles with a friend and was next off to visit the writer Mary Scott in Wiltshire.

I had to find my way by foot to a specific bus stop in a small coastal town to catch the bus going my way. But for the magic to work, I had to coincide with the drop-off of that morning’s newspaper to see its front-page photograph of a massive design in wheat that had just appeared in a farmer’s field in the Vale of Pewsey where, as it happened, was near where my friend lived! The rest is history.

Simple as pie—or cashews and apricots.

I wonder a lot, as a writer, about how to describe what  mystical consciousness feels like in my body. To me, it simply comes naturally, so I don’t know what all the hullabaloo is about. I just know it is about ‘feeling’ rather than ‘thinking.’

I suspect we all have moments when the ‘ceiling opens up and we see the sky’ as my friend Ann has put it. Who has not felt the ecstasy of falling madly in love; swooned to music that makes you ache; stood in the first rain after a long drought; had an orgasm that shook you half blind with pleasure?

For a moment we touch the ineffable and experience awe.

All that and more is what I’m talking about. It is about knowing in our whole beings the deep joy of the Mystery that underlies all phenomena of our physical world, the Mystery that is love itself. It is an energy, a vibration, a consciousness, a gratitude,  a feeling that we all have access to.

Once we recognize the high frequency ‘feel’ of this joy, we can find our way back to it easily when those who are frightened by us  try to shame us into silence.

All we need is fifty-one percent of the people accessing the higher vibrations of authentic joy to save us all from going over the brink.

Just think, only fifty-one percent of us who know how to love, can save the world! 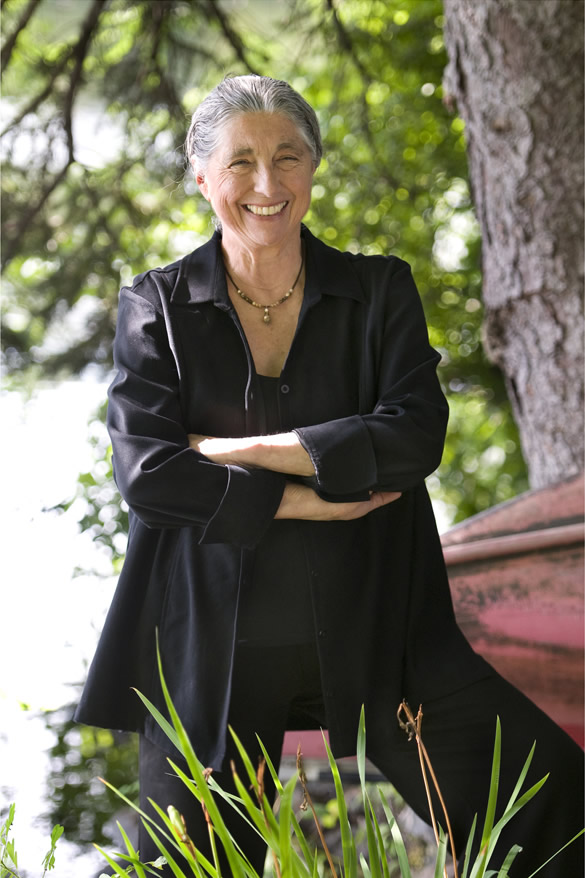